Welcome to our new, flame war free forum. If you're a guest, why not sign up for free now and join an ever growing community of friendly people to chat? If you are already a member, welcome back to the forum and thank you for signing up! Let the posting begin!
Log in
Latest topics
» Nerd-Soup

» Try and get this place rolling again?

» What song are you listening to right now?

Who is online?
In total there is 1 user online :: 0 Registered, 0 Hidden and 1 Guest

A quick review from me:

One Time - His first single. It works well as an opening track. One of the four songs out of nineteen on the album he didn't write. This song shows you how much Justin's voice has grown since he started. His voice is much higher here, whereas if you listen to a more recent song such as Never Say Never or Born To Be Somebody, you can hear that his voice is much deeper. Great song.

Favorite Girl - It's very catchy, and was great single material, despite only being a promotional digital single.

Down To Earth - This song is the only song on the album not about love. Justin wrote this song with others about how he felt when his parents split up. It's quite emotional, and Justin sings it really well. One of the best on the album.

Bigger - One of my least favourites of his. It's catchy, but it's just a bit pointless in a way. But that's not saying I don't like it at all. Justin took part in writing this one.

One Less Lonely Girl - Another great song. It's actually quite sweet, and I really like the music video that goes with it. The only down point is that Justin didn't write it.

First Dance (ft. Usher) - Quite slow, but it is quite nice to listen to. Usher doesn't get much in it, but I'm not fussed with Usher so that doesn't bother me.

Love Me - My favourite Justin song. I loved this song right from when I first heard it. It's a re-make of an old song, "Lovefool" by The Cardigans. You may think "Justin's killing an old song now", but the two people who wrote "Lovefool" also wrote this version. This one's really catchy aswell.

Common Denominator - From here on, every song is co-written by Justin. Linking a relationship to Maths here. Nice to make links I suppose. It's a piano ballad, so it's really easy on the ear.

Baby (ft. Ludacris) - Justin's most popular song. It's not as good as some people make out, but it's not as bad as people say either. It's catchy, and the lyrics are meaningful. Not the best on the album, but it's not exactly bad.

Somebody To Love - Pretty similar to what I said above. Not the best, but not the worst. Justin's voice is great in this song, as with the others.

Stuck In The Moment - One of my favourites. Justin's voice is just amazing in this song. He does the high notes really well. Great song.

U Smile - It's shorter than some of the others, but that doesn't work against this song. It's a really nice song, but I probably wouldn't have picked this song for a single release.

Runaway Love - This one's never exactly "grabbed" me. It's nice, but it's lacking something I feel.

Never Let You Go - I never thought much of this song, but more recently I've started to listen to it more. It's a great song.

Overboard (ft. Jessica Jarrell) - Never thought much of this song, but when you listen to the Live version, with Miley Cyrus instead of Jessica, you realise how good this one is!

Eenie Meenie (with Sean Kingston) - A sure grower with me. It's never been the best, even though I do like Sean Kingston aswell.

Up - One I've not thought much of, but it's nice and the lyrics are too true.

That Should Be Me - Another one I liked from the word "go". It's just great. And the acoustic version with the piano is even better!

Kiss and Tell - I sort of see why this is a digital download only track. It's by no means his best, and I've never really connected with it. But after saying that, it's not all that bad.

The album is generally good, with a few less good songs. Saying that, the less good songs aren't even bad, and there aren't any songs I'd skip when listening to the album. The highlights are definitely Love Me, That Should Be Me, Stuck In The Moment and Down To Earth. Funny how the last three are ballads. But overall, I'd rate this album 9/10. I keep listening to it on repeat. And to think, before February, I was never even a fan of Justin. Now he has over 4,000 plays on my last.fm. And this album itself has over 2,000.
_________________

Forget Me Not... - Please check it out! NEW NEW LAYOUT!
In my avatar is Cody Simpson. 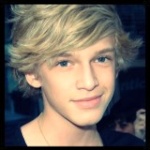